I know all of you by now are aware of my addiction for makeup. Today I’ll share with you one more addiction of mine and that is reading, specially if its a thriller, a detective story or a crime fiction. I’ve stayed awake so many nights just coz I couldn’t put down a book. Unfortunately, with the increase in work pressure and limited free time, my reading habit had taken a back seat till I decided to do something about it. I went and enrolled for the Blogadda book review program and the first book that I got to review was The Bankster by Ravi Subramanian. 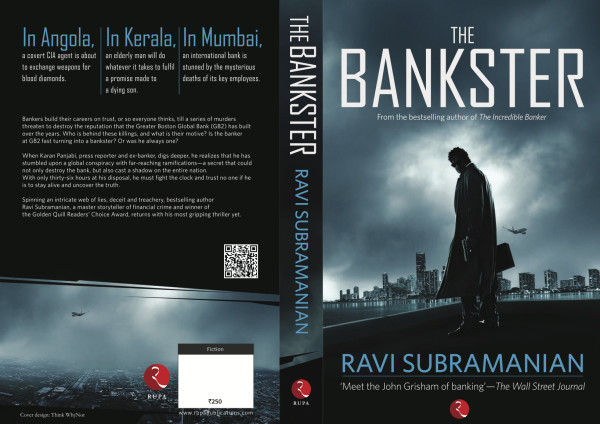 If God was a Banker (2007), I Bought the Monks Ferrari (2007), Devil in Pinstripes (2009) and The Incredible Banker (2011). Ravi’s maiden fiction venture, If God Was a Banker was published in 2007, establishing itself as a National Bestseller. The book has sold over 200,000 copies and has been widely appreciated by readers across genres and age groups. The book also won the prestigious Golden Quill Award for Readers Choice in the year 2008.
About the Book : Synopsis
Bankers build their careers on trust, or so everyone thinks, till a series of murders threaten to destroy the reputation that the Greater Boston Global Bank (GB2) has built over the years. Who is behind these killings, and what is their motive?

When Karan Panjabi, press reporter and ex-banker, digs deeper, he realizes that he has stumbled upon a global conspiracy with far reaching ramifications—a secret that could not only destroy the bank but also cast a shadow on the entire nation. With only thirty-six hours at his disposal, he must fight the clock and trust no one if he is to stay alive and uncover the truth.

My Review :
I had heard of the Banker series by Ravi Subramanian but never really got around to reading them but after finishing this book, I’m definitely getting its predecessors. Ravi, also called the John Grisham of Banking has whipped up a gripping tale of lies, deceit and treachery which kept me hooked on to the tale from start to finish. The book is based in three parts of the world, Angola, Kerala and Mumbai and through all the happenings, we get to see the real picture of the banking world. The author has managed to create quite a compelling and intricate plot interspersed with three parallel plots. What I liked was that, despite having all these plots, he successfully manages to hold on to the reader’s attention without making it complex or giving away too much. Throughout the book, I was trying to guess who the main culprit could be and the end was definitely an unexpected twist.  From murder to politics to racketeering to money laundering, this book has all the ‘masala’ that’s needed to keep one engrossed. The writing style is quite fluid and simple and despite the use of a lot of banking jargon, he simplifies them for the ‘ignorant’ readers (like me!).
What I did not like were some punctuation and grammatical errors and the use of hindi words and sentences. I would have preferred if the author stuck to using English throughout.
Overall, a very interesting read and I recommend it to all lovers of thrillers. If you have’nt read it yet, go get a copy. Oh and did I mention that I got a signed copy :))

This review is a part of the Book Reviews Program at BlogAdda.com . Participate now to get free books!