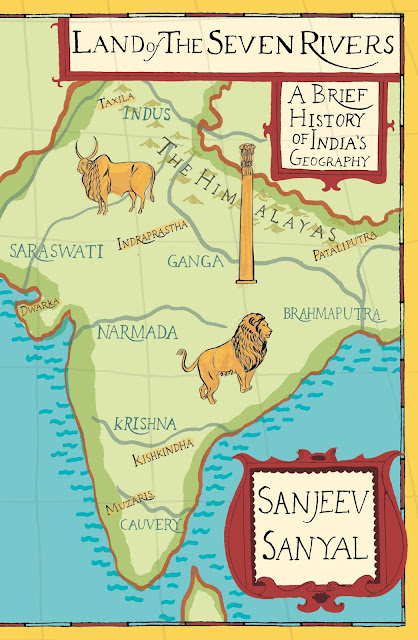 Author and economist Sanjeev Sanyal in the introduction to his book, Land of the Seven Rivers writes about the extraordinary transformation that India is undergoing – of mobile phones, satellite tv, urban reconstruction, economic boom (really??now??) and other rapid changes. From the present, he then takes the readers through a journey to the country’s past and looks back at her captivating history.
Sanyal’s new book takes a different approach to history. “A lot has already been written about wars, battles and dynasty” he says, as he explores the changing, shifting and transforming geography of India. ” Just as geography affects history, history too affects geography.” In the author’s words ” the book is about changes in India’s natural and human landscape, about ancient trade routes and cultural linkages, the rise and fall of cities, about dead rivers and the legends that keep them alive”.
Traversing remote mountain passes, visiting ancient archaeological sites, crossing rivers in shaky boats and immersing himself in old records and manuscripts, the author considers questions about Indian history that we rarely ask. Why do Indians call their country Bharat? How did the British build the railways across the sub-continent? Why was the world’s highest mountain named after George Everest? His questions are seemingly simple but raise many questions in the reader’s mind.
What I liked about the book is the way Sanyal has tried to answer the questions by infusing wit, logic, facts and intelligence. Because of the style of writing, the book does not turn out to be an encyclopedia but a truly enjoyable, thought provoking and gripping read.
Whether you are a history buff or not, the Land of the Seven Rivers is bound to fascinate and raise many questions regarding a country steeped in tradition, culture and legends. It is a book worth reading, if only, as the author says in his dedication, to know where you came from. He certainly helped me understand and appreciate my roots better.
P.S – Book sent for review. Opinion 100% mine.