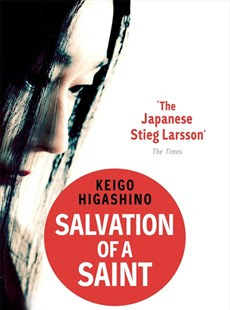 There was a time when I used to finish thrillers and whodunits in a few hours, lapping up the story eagerly like a hungry cat finishing off a bowl of milk. Remember countless nights when I’ve stayed awake reading a book to find out what happens in the end. Unfortunately, with time came in the pressure of work, night-shifts and all that enthusiasm somehow got lost. Earlier, a book used to take me max a day to finish. Now I need at least 4-5 days. An exception was however made in the case of the book that I’m talking about today – Salvation of a Saint by the Japanese author Keigo Higashino, also known as the Japanese Steig Larsson!. This one I finished in two days. Super by my current standard!
Salvation of a Saint is my first Keigo Higashino book and pardon my ignorance, I did not really hear about him till I saw the book at blogadda.com. The story intrigued me and I went ahead and applied for a chance to read and review it. I was chosen and here I am with the review..
I’m obviously not going to reveal the plot but here’s a synopsis of what the book is all about….When a man is discovered dead by poisoning in his empty home his beautiful wife, Ayane, immediately falls under suspicion. All clues point to Ayane being the logical suspect, but how could she have committed the crime when she was hundreds of miles away? While Tokyo police detective Kusanagi tries to unpick a seemingly unrelated sequence of events he finds himself falling for Ayane. As his judgement becomes dangerously clouded his assistant must call on an old friend for help; it will take a genius to unravel the most spectacular web of deceit they have ever faced…
Salvation of a Saint is Higashino’s second novel. The first one introduced Tokyo police detective Shunpei Kusanagi and his occasional consultant, Detective Galileo, both of whom are integral characters in this book as well. I expected the book to be another ‘whodunit’ but it’s actually  ‘howdunit’ that is the central question. How did they get away without leaving any evidence is the question that Detective Kusanagi and his team are out to find.
The book is a gripping read, though at times the pace slows down slightly. I like how Higashino provides insights into Japanese life and there is also a touching romance angle in the middle of investigating a crime. What I found difficult initially was to get acquainted with the principal characters and remember their names. But got a hang of the Japanese after a few chapters.  I would have liked the book to have been more fast paced and have more twists and turns, but overall I would say its a pretty good thriller. Very well written and extremely well translated. Recommended!
Price – Rs 350
This review is a part of the biggest Book Review Program for Indian Bloggers. Participate now to get free books!